Day three of dumping Procreate sketches onto this site. Here’s a spaceman… and you know what you have to do when you see a spaceman… park in it, man!

I had a hankering (Missouri Speak) to make pictures on my iPhone Xr with the ProCreate Pocket App, but I needed some sort of fine tip stylus to draw with, so I dug around on Amazon, took a shot in the dark and ordered an inexpensive Meko Fine Tip Stylus. I crossed my fingers and hoped it would work… and it actually did. In fact, it worked surprisingly well.

Super simple to turn on and off, charges with a USB, has a rubbery tip that feels good on the glass and my experience with their customer service was the best. I made a short video of my first attempt at using the stylus on my phone.

In 2011, I got an INSTAGRAM account, but never really used it because it was a “phone-only” app and extremely difficult to post artwork with, but I just discovered a workaround and now I can post artwork directly to Instagram from my computer. Now I have access to all kinds of stuff, so I plan to fill my Instagram page with brand new OLD artwork every day… so if you are interested in seeing brand new old stuff from me, come on over and subscribe to my Instagram page.

How do I spend a typical Sunday afternoon in the fall? I take a picture of my Sunday Morning Sermon Notes with the camera on my Wacom MobileStudio Pro 16, pull that picture into Photoshop CC, plop down in a recliner with the tablet on my lap, lean back, get my feet up, turn on a football game and then I contemplate, ponder and meditate on my sermon notes… mainly during the commercials.

I had a chance to play before mowing the yard so I painted this guy.

The other night I was wandering aimlessly through internetland and stumbled across something called KRITA. On a whim, I downloaded it to the Surface Pro 4 tablet I was using and began experimenting with it. I was shocked with the results.

First of all, let me say I know next to nothing about KRITA… except that it’s awesome and it’s FREE! It is a digital painting program that looks, feels and functions like Photoshop… and did I mention it was absolutely free?!

I loaded up one of my little sermon note sketches and began testing the brush engine. It responded like a trooper. This is NOT just another simple little drawing app, this is a full blown digital painting program. If you know your way around Photoshop it’s pretty easy to pick up. If not, there would probably be a bit of a learning curve to it, but well worth the effort.

It worked great on a PC and it probably would work fine on a MAC (like I said, I know next to nothing about it) so if you’re looking for a good digital painting program (or a substitute for Photoshop because you can’t afford it) you might want to give this a test drive. What have you got to lose… IT’S FREE! 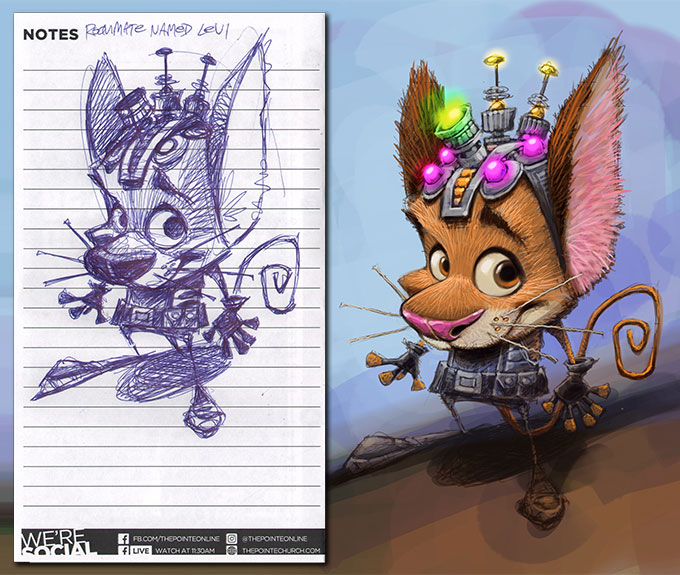 Here are a few of the steps I go through on most of my illustrations. Are you kitten me!?